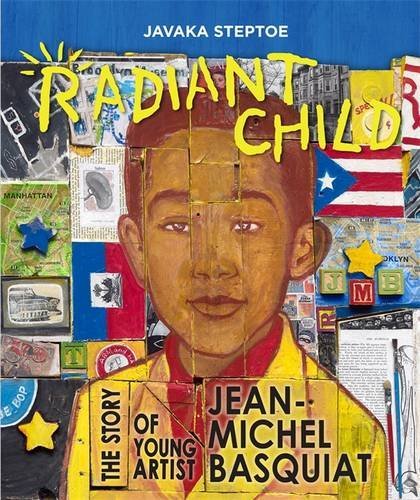 written and illustrated by Javaka Steptoe

Jean-Michel Basquiat was a young biracial artist who shot to fame in the 1980s. His vibrant collage-style paintings were unlike anything the art world had seen before. Born to a Puerto Rican mother and a Haitian father, Basquiat grew up in Brooklyn, where he was inspired by his surroundings and by his artistic mother who often took him to museums.

Basquiat saw art everywhere: in poetry, in books, in games, in words, and in the pulsing energy of New York City.

Some of Jean-Michel Basquiat’s expressive paintings

Radiant Child focuses mainly on the positive aspects of Basquiat’s artistic growth, from his childhood to his famous years. Appropriate to the young reader audience, Steptoe only touches briefly on Basquiat’s traumatic experiences of a childhood car crash and his mother’s mental illness that eventually led her to leave her family. The story doesn’t mention Basquiat’s drug abuse or his early death due to a heroin overdose.

Javaka Steptoe’s vivid text and bold artwork – inspired by Basquiat’s style – capture the artist’s energy beautifully and sends the powerful message to young readers that art doesn’t have to be neat or conform to anything to be beautiful. 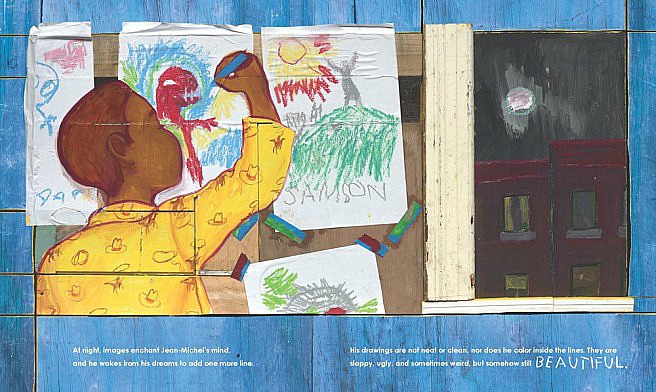