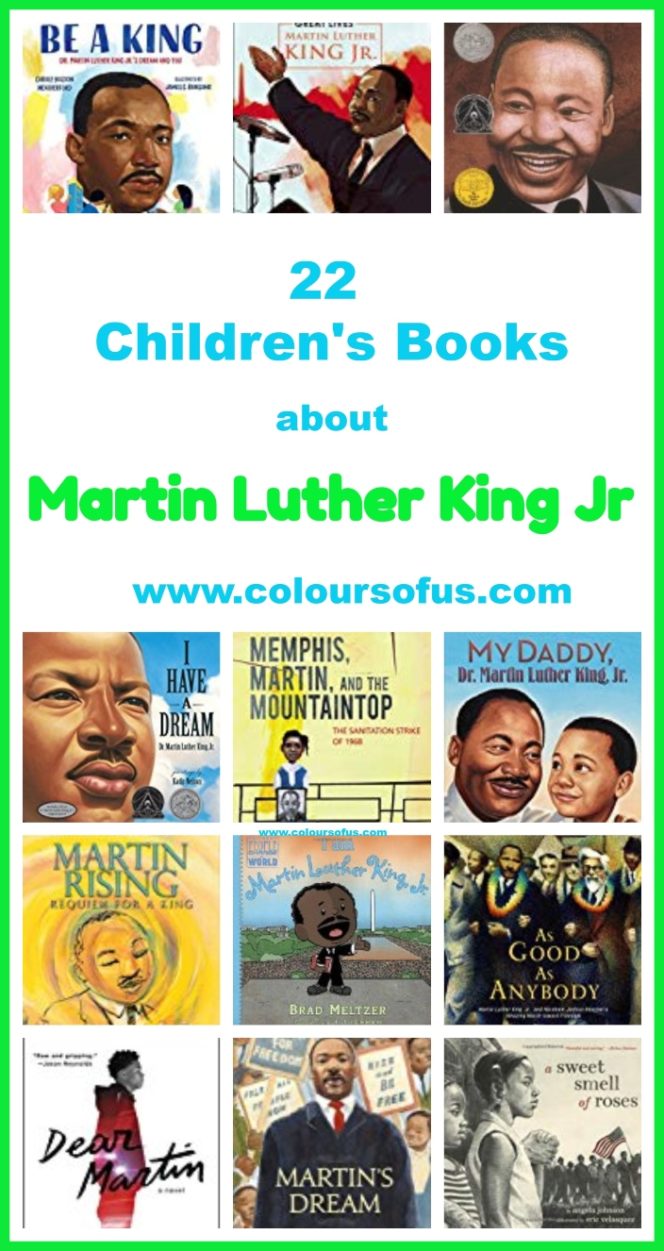 “The time is always right to do what is right.”

To honour one of the greatest leaders and civil rights activists, America celebrates Martin Luther King Jr. Day as a federal holiday. It is observed on the third Monday of January each year, which is around King’s birthday (15th).

Inspire your children to stand up for equality with these beautiful children’s books about Martin Luther King Jr.!

I am Martin Luther King, Jr.
by Brad Meltzer 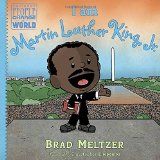 This lively picture biography by historian Brad Meltzer gives children the inspiring message that we can all be heroes. With simple text and cartoon-style illustrations, I Am Martin Luther King Jr. makes King’s life accessible to the youngest readers. ~ Preschool

In only 200 simple words The Story of Martin Luther King Jr. explains to the youngest readers how Martin Luther King Jr ended segregation in America. This little board book with its soft watercolour illustrations is an accessible introduction to one the most important figures of black history. ~ Preschool

Told from the perspective of his young niece, My Uncle Martin’s Big Heart gives a personal insight into one of the most influential figures of the twentieth century. Complemented by Velasquez’s stunning artwork, Angela Farris Watkins presents children with a rare glimpse into her uncle’s life at home, including special family moments.  ~ Preschool 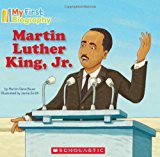 With simple, lyrical text and bold, child-friendly illustrations, Martin Luther King, Jr. introduces one of the world’s greatest heroes to the youngest readers and inspires them to change the world. ~ Preschool

A Sweet Smell of Roses
by Angela Johnson

There’s a sweet, sweet smell in the air as two young girls sneak out of their house, down the street, and across town to where men and women are gathered for a march for freedom and justice lead by Martin Luther King Jr. Inspired by countless children and young adults who took a stand, A Sweet Smell Of Roses offers a heart-lifting glimpse of children’s roles in the civil rights movement. ~ Preschool

Be a King: Dr. Martin Luther King Jr.’s Dream and You
by Carole Boston Weatherford

“You can be a King. Beat the drum for justice. March to your own conscience.” Through a school project, a class of young students learn to follow Dr Martin Luther King’s example, as he dealt with adversity and never lost hope for equality and justice. With inspiring text and beautiful watercolour illustrations by the same artist who illustrated Before She Was Harriet, Be A King is a perfect book for classroom use.  ~ Elementary School

As Good as Anybody
by Richard Michelson

Martin Luther King Jr. and Abraham Joshua Heschel are two names that stand for the quest for justice and equality.Martin grew up in an America that was plagued by racial discrimination. He became a minister like his daddy, and he preached and marched for civil rights. Abraham in a Europe that did not welcome Jews. He found a new home in America, where he became a respected rabbi like his father, carrying a message of peace and acceptance. As Good As Anybody is the heartfelt story of the remarkable friendship between these two icons of social justice.  ~ Elementary School

The Story of Martin Luther King Jr.
by Christine Platt

Martin Luther King Jr was one of the most important civil rights leaders in America. Before he made history with his powerful speeches and peaceful protests, Martin was a dedicated, smart kid who loved to learn. He challenged racism and overcame hardships to follow his passion and do the right thing. The Story of Martin Luther King Jr. is an easy-to-read and beautifully illustrated chapter book about the outstanding leader. ~ Elementary School

With simple text – interwoven with some of King’s famous words – and stunning artwork, this award-winning picture book biography introduces young readers to the life of one of the world’s most influential leaders. Starting with his childhood, Martin’s Big Words is an exquisite portrait of a man whose dream changed the world forever. Includes a brief chronology and bibliography. ~ Elementary School

I Have a Dream
by Dr. Martin Luther King Jr. 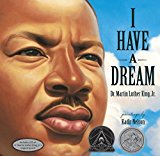 On August 28, 1963, during the March on Washington, Martin Luther King Jr. gave one of the most powerful and memorable speeches in American history. Award-winning I Have A Dream perfectly pairs King’s words on freedom and equality with Caldecott Honor winner Kadir Nelson’s expressive paintings. Includes an audio CD of the speech. ~ Elementary School

A Place to Land: Martin Luther King Jr. and the Speech That Inspired a Nation
by Barry Wittenstein

On the night before the historic March on Washington, Martin Luther King Jr. debated, worked, and wrote late into the night, trying to decide what to say— and how to say it. Much has been written about Martin Luther King, Jr. and the 1963 March on Washington. But there’s little on his legendary speech and how he came to write it. Stunningly illustrated A Place To Land tells the story behind one of the most celebrated speeches in America’s history. ~ Elementary School

“Mother Dear, one day I’m going to turn this world upside down.” In My Brother Martin King’s older sister shares some of her memories of young Martin, from playing jokes and practising the piano to a pivotal childhood experience of racism and discrimination that started King’s dream. ~ Elementary School

With simple text and appealing illustrations, Martin’s Dream is a perfect first picture book biography about King for lower Elementary School students. The book also makes for a great read-aloud for non-readers. Includes a timeline of important dates. ~ Elementary School

I Am #4: Martin Luther King Jr.
by Grace Norwich

Written from his own perspective, this chapter book follows King’s life, from his childhood through to his famous “I Have a Dream” speech. I am #4: Martin Luther King Jr. features illustrations throughout, a timeline, maps, sidebars, famous quotes, and a list of important facts about the iconic civil rights activist. ~ Elementary School

“I have a dream that my four little children will one day live in a nation where they will not be judged by the colour of their skin but by the content of their character.” One of the four little children mentioned in King’s powerful “I Have a Dream” speech is Martin Luther King III. My Daddy is a poignant picture book memoir that captures the ordinary and extraordinary moments of the author’s brief childhood with his famous father. ~ Elementary School

My Dream of Martin Luther King
by Faith Ringgold

“This time we had come to mourn Martin Luther King’s death by trading in bags containing our prejudice, hate, ignorance, violence, and fear for the slain hero’s dream. We emptied the bags onto a great pile, and as the last bag was dumped, the pile exploded into a fire so bright that it lit up the whole world. There, emblazoned across the sky, were the words: EVERY GOOD THING STARTS WITH A DREAM.” My Dream of Martin Luther King is acclaimed artist and fellow civil rights activist Faith Ringgold’s personal and powerful tribute to King’s life. ~ Elementary School

The March on Washington (American Girl: Real Stories From My Time)
by Bonnie Bader

Part of the Real Stories from My Time series, this non-fiction chapter book introduces young readers to one of the most powerful moments of the civil rights movement. With full-page illustrations, historical photos, maps, a timeline, a glossary, and a bibliography, The March On Washington is perfect for school use. Plus, American Girl Melody shares her own experiences growing up during the civil rights movement and dealing with discrimination. ~ Elementary School

Martin Rising: Requiem For a King
by Andrea Davis Pinkney

This poetic and beautiful book looks at Dr Martin Luther King Jr.’s life from an unusual angle. Through metaphor, spirituality, and multilayers of meaning, Martin Rising provides a deeply emotional account of the final months and assassination of one of the most iconic figures in American History. Perfect for classroom use! ~ Elementary School, Middle School

Who Was Martin Luther King, Jr.?
by Bonnie Bader

Free At Last: The Story of Martin Luther King, Jr.
by Angela Bull

With simple text, informative sidebars and expressive illustrations, Free At Last! is a Martin Luther King Jr. biography for proficient readers that gives a good insight into the life of the slain civil rights leader, from his childhood to his death. ~ Elementary School, Middle School 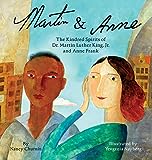 Anne Frank and Martin Luther King Jr. were born the same year a world apart. Both faced ugly prejudices and violence, which both answered with words of love and faith in humanity. Beautifully illustrated Martin & Anne is the story of their parallel journeys to find hope in darkness and to follow their dreams. ~ Middle School

Martin Luther King Jr. is a riveting graphic novel about the inspiring civil rights leader that will engage even the most reluctant reader. It follows Luther King’s life from his early childhood his childhood in Atlanta to his leading role in the Civil Rights movement. ~ Middle School

Memphis, Martin, and the Mountaintop: The Sanitation Strike of 1968
by Alice Faye Duncan

Sparked by the death of two colleagues due to unsafe equipment, sanitation workers in Memphis went on a 2-month strike in February 1968. The strike became Dr Martin Luther King Jr.’s final stand for justice. He was assassinated in his Memphis hotel the day after delivering his “I’ve Been to the Mountaintop” sermon. In a powerful combination of poetry and prose, Memphis, Martin and the Mountaintop presents these historical events from the perspective of nine-year-old Lorraine Jackson whose father participated in the protest.  ~ African – Middle School

Top of his class and set for the Ivy League, Justyce writes a journal to Martin Lurther King Jr in an attempt to make sense of a police encounter in which he was treated roughly and unfairly. When he is caught up in another police encounter in which shots are fired, Justyce finds himself under attack in the media. Dear Martin is a compelling must-read that tackles the myth that if you don’t do anything wrong you have nothing to fear from the police. ~ African – High School