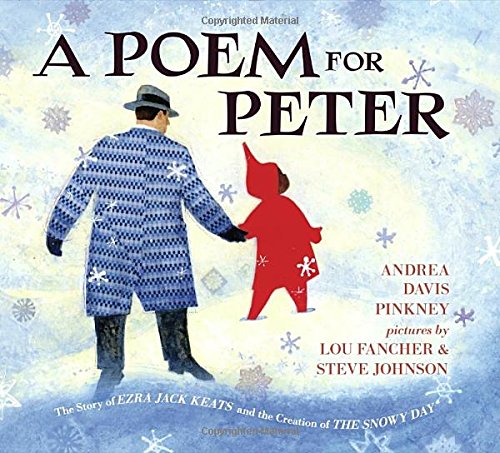 A Poem for Peter: The Story of Ezra Jack Keats and the Creation of The Snowy Day

A Poem for Peter is a beautiful homage to Ezra Jack Keats – pioneer of multicultural children’s books – and his famous character Peter, the little black boy from award-winning The Snowy Day.

“Brown-sugar boy in a blanket of white.

Bright as the day you came onto the page.

From the hand of a man who saw you for you.”

Addressed mainly to Peter, this touching picture book traces the life of Ezra Jack Keats and the beginnings of Peter. The story begins over a hundred years ago, when Keats was born in Brooklyn into a struggling Polish immigrant family.

Keats’ talent for painting became obvious at an early age. His family was supportive despite their concerns that his dream of being an artist was an unrealistic one. In High School Keats won several prizes and scholarships but it would take many more years before he had the opportunity to realize his greatest dream: To write and illustrate his own book.

The character of Peter was inspired by a magazine clipping of a little black boy from 1940. Keats wrote:

“Then began an experience that turned my life around — working on a book with a black kid as hero. None of the manuscripts I’d been illustrating featured any black kids — except for token blacks in the background. My book would have him there simply because he should have been there all along.”

The Snowy Day was the first mainstream book to feature a black child as a main character. It won the Caldecott Medal and went on to become a timeless classic that appeals to children everywhere.

when you and your hue

burst onto the scene,

all of us came out to play.”

A Poem for Peter tells the inspiring story of a boy who pursued a dream, and who, in turn, inspired generations of other dreamers. Pinkney’s lyrical text (that she refers to as “collage verse”) is perfectly complemented by lively Keats-style mixed media collages. Suitable for Elementary School children aged 7 to 10.

*You can buy an A Poem for Peter from Amazon USA, CAN or UK by clicking on the book title or images*