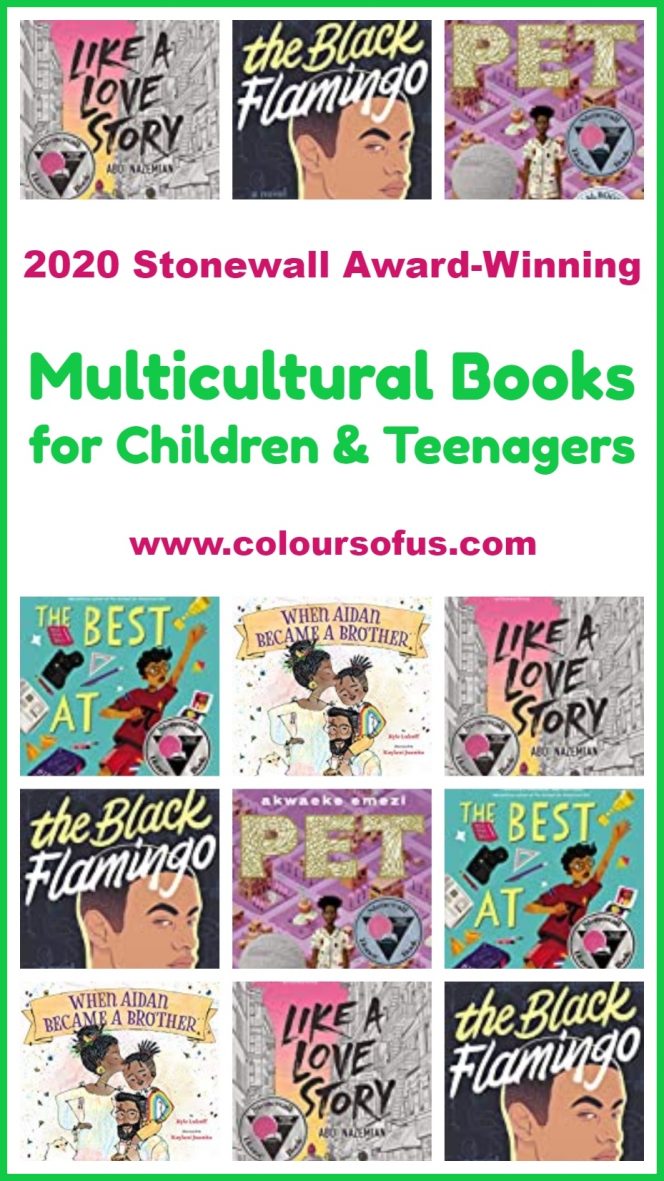 For the first time in the 51 year history of the Stonewall Awards, the two award-winners as well as the three honour books this year were both multicultural AND written by own voices! The Stonewall Award recognizes children’s and young adult books of exceptional merit relating to the gay/lesbian/bisexual/transgender experience.

The Black Flamingo
by Dean Atta

Growing up in London as a mixed-race gay teen, Michael struggles to navigate his Greek-Cypriot and Jamaican, never quite feeling Greek or Black enough. As he gets older, Michael’s coming out is only the start of learning who he is and where he fits in. When he discovers the Drag Society, he finally finds where he belongs. Told with raw honesty and insight, The Black Flamingo is a fierce novel-in-verse that explores cultural and sexual identity. ~ African – High School

There are no monsters anymore, or so the children in the city of Lucille are taught. Jam and her best friend, Redemption, have grown up with this lesson all their life. But when Jam meets Pet, a creature made of horns and colours and claws, who emerges from one of her mother’s paintings and a drop of Jam’s blood, she must reconsider what she’s been told. Pet has come to hunt a monster, and the shadow of something grim lurks in Redemption’s house. Jam must fight not only to protect her best friend, but also to uncover the truth, and the answer to the question: How do you save the world from monsters if no one will admit they exist? Pet is a Akwaeke Emezi’s riveting and timely young adult debut about identity and justice. ~ African – High School

When Aidan Became a Brother
by Kyle Lukoff

When biracial (black and South Asian) Aidan was born, everyone thought he was a girl. His parents gave him a pretty name, his room looked like a girl’s room, and he wore clothes that other girls liked wearing. After he realized he was a trans boy, Aidan and his parents fixed the parts of his life that didn’t fit anymore, and he settled happily into his new life. But when his parents announce that he will become a big brother, Aidan is determined to do everything right for his new sibling from the beginning. When Aidan Became a Brother is a heartwarming book that celebrates the changes in a transgender boy’s life, from his initial coming-out to becoming a big brother. ~ Diverse – Preschool

The Best at It
by Maulik Pancholy

“Find one thing you’re really good at and become the BEST at it.” That is the well-meaning advice Rahul’s grandfather, Bhai, gives him for the start of middle school in a small town in Indiana. While Rahul is not quite sure what that one special thing is, he is convinced that once he finds it, bullies like Brent Mason will stop torturing him at school. And he won’t be worried about staring too long at his classmate Justin Emery. With his best friend, Chelsea, by his side, Rahul is ready to crush this challenge…. But what if he discovers he isn’t the best at anything? The Best At It is a hilarious and heartfelt middle grade debut about a gay Indian American boy coming into his own. ~ Asian – Middle School

For three teens in 1989 New York City the world is changing. Reza is an Iranian boy who has just moved to the city with his mother to live with his stepfather and stepbrother. He knows he’s gay, but all he knows of gay life are the media’s images of men dying of AIDS. Judy is an aspiring fashion designer who worships her uncle Stephen, a gay man with AIDS who devotes his time to activism. Judy meets Reza and they start dating. Art is Judy’s best friend, their school’s only out and proud teen. He’ll never be who his conservative parents want him to be, so he rebels by documenting the AIDS crisis through his photographs. As Reza and Art grow closer, Reza struggles to find a way out of his deception that won’t break Judy’s heart—and destroy the most meaningful friendship he’s ever known. Like A Love Story is an epic love letter to queerness, self-expression, and individuality. ~ Asian – High School