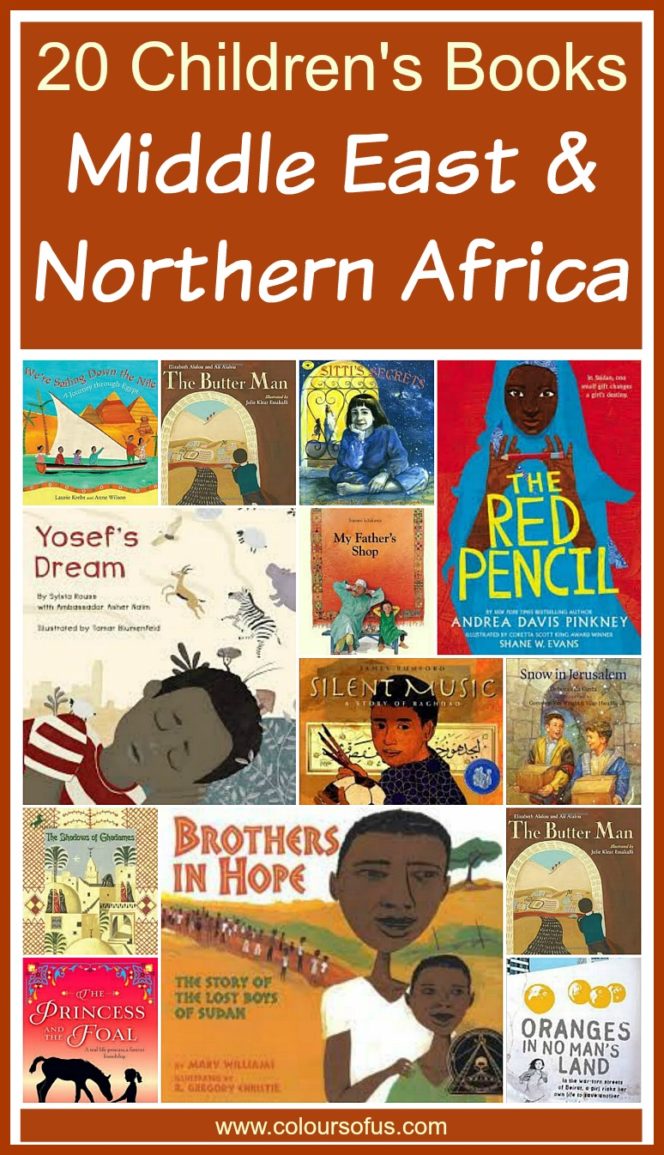 It serves to celebrate the rich history and diverse cultures of this vast region, stretching from Morocco in the West to Iran in the East, from Syria in the North to Sudan in the South.

Here are some wonderful books to introduce your children to the Middle East and Northern Africa:

My Father’s Shop
by Satomi Ichikawa

Mustafa loves a particular rug in his father’s shop. It has a hole, so he can put it over his head and still see out. When his father tries to teach his son some foreign languages, Mustafa runs off to the bustling Moroccan market (with his favourite rug on his head). There he finds a different way of learning languages – and of getting tourists to his father’s shop.  My Father’s Shop has a sweet storyline and vibrant watercolour illustrations.  ~ African – Preschool

The Butter Man
by Elizabeth Alalou 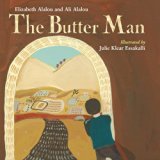 As Nora’s Moroccan-born father prepares a couscous meal, he talks about his childhood in the High Atlas Mountains. He tells her how he coped with a famine, describing the constant feeling of hunger as “a little mouse gnawing on my insides.” The Butter Man is a warm family story about the Berber culture of North Africa, perfectly complemented by folk-art paintings of sunlit landscapes. Includes a glossary of Berber words. ~ African – Elementary School
More books about fathers: 40 Multicultural Children’s Books about Fathers

Sabbath Lion: A Jewish Folktale from Algeria
by Howard Schwartz

Yosef’s widowed mother gets news of a family inheritance in Egypt. The 10-year-old boy offers to travel there to fetch it. When the caravan leader refuses to stop during the Sabbath, Yosef stays behind in the desert. Sent by the Sabbath Queen as a reward for honouring the Sabbath, a great lion arrives to give Yosef protection on his dangerous journey. The Sabbath Lion is an engaging story, brought to life by dramatic paintings. ~ African – Elementary School

The Shadows of Ghadames
by Joelle Stolz

12-year-old Malika yearns to travel like her merchant father. But in late 19th century Libya, that is not an option for a Muslim girl. One night the arrival of a stranger disrupts the traditional order of things in unexpected ways. The Shadows of Ghadames explores women’s rights, freedom, religion, and identity. ~ African – Middle School

We’re Sailing Down the Nile
by Laurie Krebs 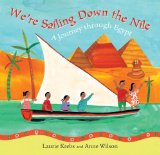 “Climb aboard the river boat! / We’re sailing down the Nile.”  Children are taken on a river adventure from the temple of Abu Simbel all the way to the amazing city of Cairo. With rhyming text, colourful illustrations, and lots of added info, We’re Sailing Down the Nile makes Egyptian culture and history accessible to the youngest readers. ~ African – Preschool

In January 2011, thousands of protesters against the regime – young and old, Muslims and Christians – formed a human chain to protect the Library of Alexandria, chanting “We love you, Egypt!”. Award-winning Hands Around The Library captures this touching historical moment with beautiful mixed-media collages. ~ African – Preschool

The Day of Ahmed’s Secret
by Florence Perry Heide

Ahmed delivers bottles of propane gas with his donkey cart in Cairo. As he goes about his day, he can’t wait to share a special secret with his family: He has learned to write his name in Arabic. With detailed watercolour illustrations, The Day of Ahmed’s Secret shows daily life in the busy streets of Egypt’s capital.  ~ African – Elementary School

Brothers in Hope
by Mary Williams

This award-winning picture book tells the true story of Garang Deng, one of 20,000 Sudanese war orphans. The 8-year-old boy was one of the leaders of the orphans who walked more than a thousand miles in search for safety. Half of them died on the dangerous 4-year-long journey. Those who made it to Ethiopia had to flee again when war arrived there, this time to Kenya. Years later, 3,800 of the children found a new home in the U.S.  Brothers in Hope is a heartbreaking yet inspirational story about the unyielding power of the human spirit. ~ African – Elementary School

Another powerful story about a Sudanese war orphan, this time told from a girl’s perspective. Amira’s placid farm life is devastated when war arrives in her village and she loses nearly everything. The 12-year-old has to make the long journey on foot to a refugee camp. Just when she begins to lose hope, the simple gift of a red pencil opens her mind to the possibilities that may still lie ahead. With Pinkney’s poetic language and Evans’ expressive drawing, The Red Pencil is an engaging book about tragic loss and the power of hope. ~ African – Middle School

A Long Walk to Water
by Linda Sue Park

A Long Walk to Water tells the stories of two 11-year-old Sudanese children -alternating between their viewpoints – at different points in time. In 1985 Salva is one of the “lost boys” of Sudan, a refugee searching the African continent on foot for his family and a safe place. In 2008 Nya spends eight hours every day making trips to the pond to fetch water. The children’s stories eventually intersect in a touching and hopeful way. ~ African – Middle School

A young girl remembers visiting her grandmother in a Palestinian village. Speaking different languages, they invent their own language using signs, hums and claps. Back in the U.S., the girl writes a letter to the President: “If the people of the United States could meet Sitti, they’d like her, for sure.” Sitti’s Secrets is a lyrical picture book about the bond between a child and her grandmother, brought to life by soft mixed-media paintings. ~ Asian – Elementary School

Avi and Hamudi both live in Jerusalem, Avi in the Jewish Quarter and Hamudi in the Muslim Quarter. To each boy, the other’s neighbourhood is an alien land. When one day they follow the stray cat they both care for, something wonderful happens. Snow in Jerusalem is a beautifully illustrated story of peace and friendship. ~ Asian – Elementary School

As a young man in Israel, Yosef looks back at his childhood in exile in Ethiopia. He remembers a dream in which he was given a choice: Climb mountains with Gazelle, never belonging anywhere? Hide in the shadows with Hyena? Or grab Eagle’s wings and be taken far, far away? Yosef chooses the last. Shortly after, his family’s long-held dream of returning to Israel becomes reality. New release Yosef’s Dream is a beautifully illustrated picture book that makes the history of Ethiopian Jews accessible to young readers. ~ African – Elementary School, Asian – Elementary School

Oranges in No Man’s Land
by Elizabeth Laird

Set in Lebanon during the civil war, this is the story of ten-year-old Ayesha’s terrifying journey across no man’s land. The girl has to reach a doctor in hostile territory in order to get medicine for her dying grandmother. Award-winning Oranges in No Man’s Land is a gripping and moving tribute to the human spirit. ~ Asian – Middle School

The Princess and the Foal
by Stacy Gregg

When Princess Haya’s mother is killed in a tragic accident, the 7-year-old is devastated. Haya’s father, King Hussein, gives her an orphan foal to raise. And that foal changes the Princess Haya’s life. The Princess and the Foal is an inspiring novel about real-life princess Haya of Jordan who became an Olympic equestrian. ~ Asian – Middle School

The Librarian of Basra: A True Story from Iraq
by Jeanette Winter

“In the Koran, the first thing God said to Muhammad was ‘Read.'” When war comes to Iraq, librarian Alia Muhammad Baker takes matters into her own hands to protect the books from being destroyed. Every day she packs her car with books and takes them home, thus saving 70% of the 30,000 books in her library. The Librarian of Basra is a true story about an inspiring woman’s love of literature and respect for knowledge.  ~ Asian – Elementary School

Silent Music: A Story of Baghdad
by James Rumford

Ali loves soccer, music, dancing, and most of all the ancient art of calligraphy. When bombs start to fall on Baghdad, Ali finds comfort in writing to the silent music in his head that drowns out the terrifying sounds of the war. With stunning pencil-charcoal-and-calligraphy collages, Silent Music tells the touching story of a child’s everyday survival during times of war. ~ Asian – Elementary School

Persepolis: The Story of a Childhood
by Marjane Satrapi

Best-selling Persepolis is the author’s memoir of her childhood during the Shah’s regime, the Islamic Revolution, and the war with Iraq. Satrapi’s child’s-eye view of dethroned emperors, state-sanctioned whippings, and heroes of the revolution paints an intensely personal portrait of daily life in Iran. Teenagers will love this intelligent, funny, and heartbreaking graphic novel! ~ Asian – High School

The White Nights of Ramadan
by Maha Addasi

At almost-full moon, it is time to prepare for Girgian, a mid-Ramadan celebration observed mostly in the Arabian Gulf states. Noor and her brothers make candy to share with the children in the neighbourhood. They also decorate canvas bags, hoping to fill them with treats when they go from house to house in traditional clothes. The White Nights of Ramadan introduces children to the Ramadan traditions of Kuwait. ~ Asian – Elementary School

The Turtle of Oman
by Naomi Shihab Nye

Aref does not want to leave Oman to live in Michigan. He does not want to leave his friends and his beloved grandfather, Sidi. Aref and Sidi go on a series of adventures, from sleep on Sidi’s roof, fishing in the Gulf of Oman and watching the sea turtles. At each stop, Sidi finds a small stone that he later slips into Aref’s suitcase. Award-winning The Turtles of Oman is a quiet, touching novel about family bonds and immigration. ~ Asian – Elementary School