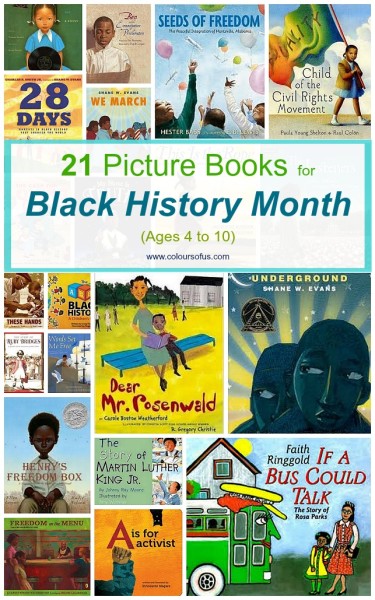 First celebrated by Black United Students in February 1970, Black History Month was officially recognized by the US government in 1976 and has been observed annually ever since. It serves to remember historical events and celebrate the remarkable contributions and accomplishments of African Americans throughout the nation’s history.

Black History Month is a fantastic opportunity for children of all ethnicities to learn about the struggles and achievements of African Americans. Information and open dialogue can lead to better understanding and help correct misunderstandings.

Here are some of my favourite picture books for Black History Month:

The ABC’s of Black History
by Craig Thompson

Despite the illustrations being a bit bland, this is a good book for introducing little ones to black history. From Africa where the first people were born to Harlem Renaissance novelist Zora Neale Hurston, children are taken on an alphabetic journey to places, events, people and inventions significant to black history. ~ Preschool

A is for Activist
by Innosanto Nagara 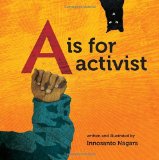 “A is for Activist./Advocate. Abolitionist. Ally./Actively Answering A call to Action.” “Y is for You. And Youth./Your planet. Your rights/Your future. Your truth./Y is for Yes. Yes! Yes! Yes!” A is for Activist is a boardbook, but I find the text more suitable for preschoolers than toddlers. This unusual and colourful book has a powerful message about taking a stand against racism, war and violence, and for acceptance and equality. ~ Preschool

In only 200 simple words The Story of Martin Luther King Jr. explains to the youngest readers how Martin Luther King Jr ended segregation in America. This little board book with its soft watercolour illustrations is an accessible introduction to one the most important figures of black history! ~ Preschool

These Hands
by Margaret H. Mason

“Look at these hands, Joseph./Did you know these hands/used to . . .” Joseph’s hears about all the things his grandfather’s hands could do, from playing the piano to tying a triple bowline knot in three seconds flat. He also learns that there were times when his grandfather’s hands weren’t allowed to bake bread, and how people fought discrimination together. The stunning sepia illustrations in These Hands convey the love between grandfahter and grandson beautifully. ~ Preschool

We March
by Shane W. Evans

We March is a moving introduction to the historic March on Washington for Jobs and Freedom in 1963. The story follows a family on the day as they wake up, get ready and join the march, ending with Martin Luther King Jr’s famous “I have a dream” speech. With minimalist text and stunning illustrations, the excitement of that day is brought to life for the youngest readers. ~ Preschool

Underground: Finding the Light to Freedom
by Shane W. Evans

A family crawls along the ground, runs barefoot through the dark woods, sleeps under bushes and finds shelter in a kind stranger’s home.They are heading for freedom by way of the Underground Railroad, a complex network of everyday people who helped thousands of slaves on their flight by giving them food, shelter and directions. With few words and compelling illustrations Underground captures the fear and danger as well as the joy of the fugitives when they are finally free. ~ Elementary School

If A Bus Could Talk: The Story of Rosa Parks
by Faith Ringgold

On a magical bus ride to school Marcie learns about the story of Rosa Parks, the mother of the Civil Rights movement. She even meets Rosa Parks and some other distinguished guests at a birthday party. Illustrated with colourful folk-art style paintings, If a Bus Could Talk tells Rosa Park’s story in an unusual and bold way that is appealing to children. ~ Elementary School

This Is the Rope: A Story From the Great Migration
by Jacqueline Woodson

A little girl finds a rope under a tree in South Carolina during the Great Migration. This rope is passed down over three generations and becomes part of her family history, symbolizing the strong family ties. This is the Rope is a beautifully illustrated, thoughtful story about a family adapting to change and embracing the future whilst holding on to their family values. ~ Elementary School

Seeds of Freedom: The Peaceful Integration of Huntsville, Alabama
by Hester Bass

The Civil Rights era saw many violent clashes between blacks and whites. Not so in Huntsville, a quiet town in Alabama: The black community was committed to demanding equality in a non-violent way. They held sit-ins in restaurants and public parks, and wore jeans to church on Blue Jean Sunday. The peaceful protests ended segregation within a few months, and had a ripple effect across the nation. Seeds of Freedom is an inspiring picture book that shows how racial discrimination, bullying, and unfairness can be addressed successfully with resourcefulness and perseverance. ~ Elementary School

With hard work and a donation from Julius Rosenwald, President of Sears, Roebuck and Co, a black Southern community builds themselves a new school in 1921. Told in narrative poetry and illustrated with unusual, vivid gouache and coloured pencil paitings, Dear Mr. Rosenwald is an empowering story about a community pulling together for an important cause. ~ Elementary School

The Listeners
by Gloria Whelan

Ella May and her family are slaves on a cotton plantation. Every night the children are sent to eavesdrop on their master’s conversations and carry the news back to their folks. Who will be sold, who will stay? Beautifully illustrated with muted watercolour paintings, The Listeners ends on a hopeful note, with the children bringing home news about a new president and the chance of imminent freedom. ~ Elementary School

Words Set Me Free: The Story of Young Frederick Douglass
by Lesa Cline-Ransome

“I would unite with anybody to do right and with nobody to do wrong.” Told in the voice of Frederick Douglass, famous advocate of equal rights, this picture book biography chronicles his youth. It was through reading and writing that Douglass was able to stand up for himself and others. Words set me free is a moving and captivating look at the young life of a slave for whom literacy was a catalyst for liberation. ~ Elementary School

My Name Is Truth: The Life of Sojourner Truth
by Ann Turner

Told in her own voice, this is the true story of former slave and abolitionist Isabella Baumfree, better known as Sojourner Truth. With poetic text and rich watercolour illustrations, My Name is Truth details the inspiring life of this brave champion of equality, from her years as a slave and the broken promise of freedom to her work as a preacher. ~ Elementary School

The Case for Loving: The Fight for Interracial Marriage
by Selina Alko

“Imagine not being able to marry the person you loved,/just because they were of a race different from your own.” The Case for Loving tells the story of Mildred and Richard Loving who fell in love and got married in Washington, D.C. When they relocated to their hometown in Virginia with their three children, they were arrested for violating the laws against interracial marriage. The Lovings took their case all the way to the Supreme Court, resulting in the abolishment of that discriminating law in 1967. ~ Elementary School

Henry’s Freedom Box: A True Story from the Underground Railroad
by Ellen Levine

Young slave Henry is taken from his family and put to work in a warehouse. He grows up and marries but his wife and children are sold at the slave market. In the midst of his grief and devastation, he comes up with the clever plan to mail himself to freedom. Henry’s Freedom Box is a dramatic and inspiring story, stunningly illustrated with expressive watercolour paintings. ~ Elementary School

The Story Of Ruby Bridges
by Robert Coles

In 1960 a judge orders little Ruby to attend first grade at William Frantz Elementary, an all-white school in New Orleans. Surrounded by Federal Marshalls, Ruby faces angry mobs of segregationists as she walks through the school door on her first day (and many after). Being the only student in her class she is taught by a supportive teacher. With simple text and engaging watercolor illustrations, The Story of Ruby Bridges is a moving picture book about a little girl’s calm perseverance and gracious forgiveness in the ugly face of hate and racism. ~ Elementary School

28 Days: Moments in Black History that Changed the World
by Charles R. Smith

This unique book features a different pivotal figure for each day of Black History Month. Starting with  Crispus Attucks, whose shooting in the Boston Massacre sparked the Revolutionary War, to Barack Obama, the country’s first African-American president. With strong collage-style illustrations 28 Days covers the time from 1770 to the present, and includes poetry, plays, quotations, countdowns and eulogies. ~ Elementary School

Ellington Was Not a Street
by Ntozake Shange

Using a famous poem of hers as the storyline, Ntozake Shange recalls her childhood home and the inspiring men who often gathered there, from Paul Robeson to Dizzy Gillespie and Duke Ellington. A biographical sketch of each of these men is included at the end. Kadir Nelson’s expressive paintings won Ellington Was Not a Street the Coretta Scott King Illustrator Award in 2005. ~ Elementary School

Child of the Civil Rights Movement
by Paula Young Shelton

A close-up look at the birth of the Civil Rights Movement by Paula Young Shelton, daughter of activist Andrew Young. Growing up in the deep south, surrounded by leading activists – including “Uncle” Martin Luther King Jr. – , Paula experiences and watches the struggles and joins in the historic march from Selma to Montgomery. The grainy sepia pencil-and-watercolour illustrations have a nostalgic photoalbum effect and add to the intimate feel of Child of the Civil Rights Movement. ~ Elementary School

Freedom on the Menu: The Greensboro Sit-Ins
by Carole Boston Weatherford

All 8-year-old Connie wants is to be allowed to sit at Woolworth’s lunch counter and eat a banana split like all the white children. One day she watches four black young men sitting down at the lunch counter and refusing to get up. This incident sparks a movement for equal rights throughout Greensboro and North Carolina. Too young to participate, Connie helps her older siblings make signs for the march. The dark impressionistic paintings of Freedom on the Menu reflect the dark athmosphere of segregation and complement the heartfelt story. ~ Elementary School

Ben and the Emancipation Proclamation
by Pat Sherman

Young slave Ben teaches himself to read with the help of street signs and cast-off newspapers. Imprisoned during the Civil War, Ben gets his hands on a newspaper and, to the applause of his fellow prisoners, reads aloud Lincoln’s new emancipation proclamation. Beautifully illustrated in sepia and gold tones by Floyd Cooper, Ben and the Emancipation Proclamation is a moving and inspirational story – based on actual events – highlighting the power of literacy. ~ Elementary School