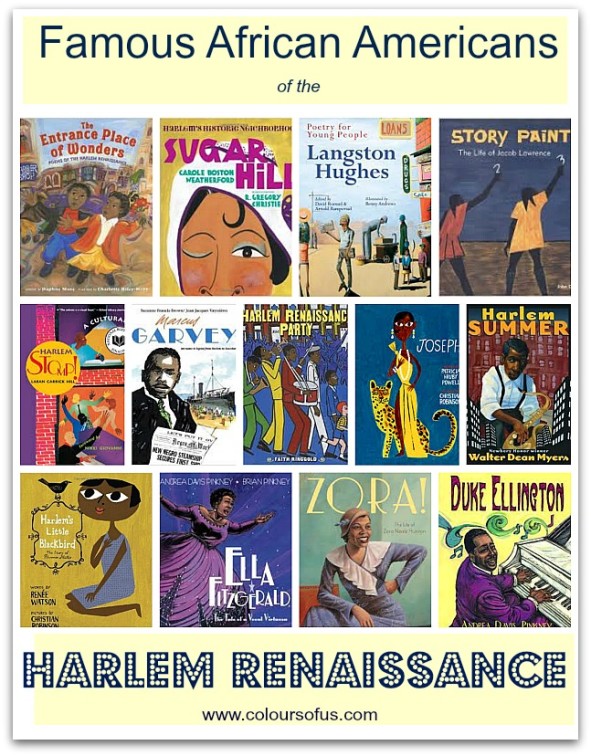 The Harlem Renaissance was a cultural, social, and artistic explosion that took place in Harlem, New York, between 1918 and 1930. It was considered to be a rebirth of African American arts. Poets, musicians, actors, artists, and intellectuals brought in new ideas and forms of expression that shaped a new black culture and identity.

15 Children’s Books about African Americans of the Harlem Renaissance

Harlem’s Little Blackbird tells the story of Florence Mills, an African American singer born in 1896. In simple yet poetic text, complemented by stunning paper-cut illustrations, the story follows Mills from singing with her mother to breaking into the musical world. Despite her success, Mills declined the role of a lifetime and chose to support all-black musicals instead by only performing in shows with unknown black singers and actors.  ~ Elementary School

“Sugar Hill, Sugar Hill where life is sweet/and kids play stickball in the street./Where Duke and Count plunk out new tunes/and Zora spins stories by the moon.” With lyrical text and vibrant illustrations, Sugar Hill takes the young reader on a walk through Harlem to meet many of the influential people of this legendary neighbourhood, such as Duke Ellington, Faith Ringgold, Zora Neale Hurston and many more. Brief biographies of all the people mentioned are included at the end. ~ Elementary School

Marcus Mosiah Garvey was one of the most influential African Americans of the 20th century, and a central figure during the Harlem Renaissance. His powerful message of Black Pride is still relevant today. Marcus Garvey tells the story of his life in an accessible way, supported by colourful illustrations. ~ Elementary School

Ella Fitzgerald: The Tale of a Vocal Virtuosa
by Andrea Davis Pinkney

Ella’s fictional cat ‘Scat Cat Monroe’ tells the story of the amazing life of “the first lady of song”. With engaging text and vibrant illustrations, Ella Fitzgerald: The Tale of a Vocal Virtuosa celebrates the distinctive style of one of the most talented performers and her impact upon contemporary music. ~ Elementary School

Duke Ellington: The Piano Prince and His Orchestra
by Andrea Davis Pinkney

“He was a smooth-talkin’, slick-steppin’, piano-playin’ kid”. In the same style of Ella Fitzgerald: The Tale of a Vocal Virtuosa, Andrea Davis Pinkney celebrates another one of the greatest African American performers of the 20th century: “King of the Keys” Duke Ellington. The ryhthmic, swinging prose of Duke Ellington reflects the vibrant energy of his music perfectly. ~ Elementary School

Josephine: The Dazzling Life of Josephine Baker is a detailed portrait (104 pages!) of the legendary performer and civil rights activist. In lively free-verse, complemented by colourful acrylic illustrations, the picture book tells of the struggles and triumphs of this extraordinary woman who worked her way from the slums of St. Louis to the grandest stages of the world. ~ Elementary School

The Entrance Place of Wonders
by Daphne Muse

Entrance Place of Wonders is a stunning collection of poems written during the Harlem Renaissance. The vibrant picture book features twenty poems, some by famous poets, such as Langston Hughes and Countee Cullen, and some by less well-known ones, such as Effie Lee Newsome and Dorothy Vena Johnson. Includes an introduction about the Harlem Renaissance and brief biographies of the poets. ~ Elementary School

A pivotal figure of the Harlem Renaissance herself, Faith Ringgold takes readers on an exciting journey through Harlem in the 1920’s. Little Lonnie and his uncle Bates meet some of the famous African Americans of this time, from Langston Hughes and W.E.B. Du Bois to Josephine Baker and Zora Neale Hurston. The bold and bright illustrations of Harlem Renaissance Party capture the energy of this vibrant decade beautifully. Includes a glossary and further reading list. ~ Elementary School

With a fresh design this award-winning picture book is a charming collection of some of Langston Hughes’s poems, including “My People”, “Words Like Freedom” and “Harlem”. Vibrant folk-art illustrations complement Hughes’ powerful poems beautifully. Includes an introduction about Hughes’ life, his own thoughts about each poem, and footnotes that explain dialect and historical facts. ~ Middle School

Story Painter: The Life of Jacob Lawrence
by John Duggleby 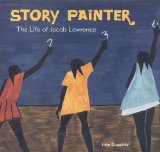 The paintings of Jacob Lawrence tell stories of slavery and freedom, of human migration and renaissance, of struggle and triumph. Story Painter: The Life of Jacob Lawrence is an engaging biopgraphy featuring many full-colour reproductions of one of the most renowned African American painters. Includes a glossary. ~ Middle School

“Even as a little girl, Zora Neale Hurston was confident, charismatic, and determined to be extraordinary.” Zora! is a compelling portrait of the brilliant African American writer who lived and worked alongside other influential authors, such as Langston Hughes and Alain Locke, during the Harlem Renaissance. Supported by archival photographs and reproductions, this well researched biography tells of Zora’s life in a straightforward way.  ~ Middle School

Black Stars of the Harlem Renaissance
by Jim Haskins

This broad collection of biographies brings to life a vibrant part of African American history. Illustrating the lifes of over twenty extraordinary black men and women, Black Stars of the Harlem Renaissance is a captivating read and a good jumping-off point for further studies. ~ Middle School

In poignant poems Weatherford chronicles the life of Billie Holiday, one of the greatest jazz singers of the 20th century. She describes Billie’s journey from poverty and hardship to fame with some of the hottest big bands during the Harlem Renaissance. Stunningly illustrated with Cooper’s trademark grainy sepia paintings, Becoming Billie Holiday is a touching tribute to this amazing female icon of African American culture. ~ High School

It’s 1925 and 16-year-old musician Mark Purvis dreams of breaking into Harlem’s jazz scene. He meets Langston Hughes and Countee Cullen and is invited to one of Alfred Knopf’s parties. Needing to earn money, Mark becomes involved in a bootlegging scheme with jazz artist Fats Waller and finds himself crossing gangster Dutch Schultz. Harlem Summer is a light-hearted and action-packed historical novel that teenagers will love! ~ High School

“In the 1920s, Harlem was hot!” Harlem Stomp describes the historical events leading up to the Harlem Renaissance, from the beginnings of Black Consciousness to the Great Migration and World War I, culminating in the rise of Harlem with its  explosion of creativity. Well researched and richly illustrated, Harlem Stomp! brings the Harlem Renaissance to life for young adults. ~ High School

Multicultural Book of the Month: The Case for Loving