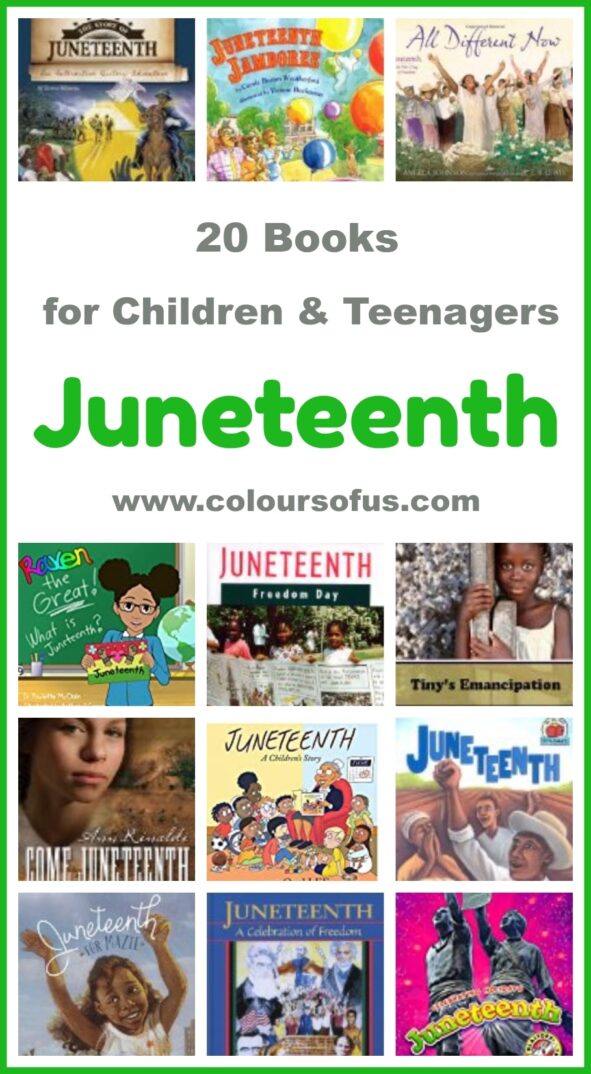 19th of June is Juneteenth! Also known as Juneteenth Freedom Day, it commemorates the abolition of slavery in Texas, and more generally the emancipation of enslaved African Americans throughout the Confederate South. On June 19th 1865 the Union soldiers brought the news to Texas that the war had ended and the slaves were now free.

Browse this list of beautiful children’s books celebrating Juneteenth, for Preschool, Elementary School, Middle School and High School – and make sure to also check out the Juneteenth Activity Books at the end of the post!

The Story of Juneteenth
by Dorena Williamson

What are the origins of America’s newest national holiday? With simple, age-appropriate language and colourful illustrations, this board book introduces children to the events of June 19, 1865, when Union General Gordon Granger arrived in Galveston, Texas, with the news that all enslaved people were declared free and the Civil War had ended. Thoroughly researched and historically accurate, The Story of Juneteenth distills a pivotal moment in U.S. history. ~ African – Preschool

Juneteenth for Mazie
by Floyd Cooper

Mazie is unhappy about her perceived lack of freedom, including bedtimes and cookie restrictions. Her father explains that her restrictions aren’t so terrible: “Well, Great, Great, Great Grandpa Mose heard ‘no’ even more.” The day before Juneteenth Mazie’s father tells her of the struggles and triumphs of her ancestors, from slavery and the Emancipation Proclamation to segregation and the Selma to Montgomery March. With simple text and realistic oil paintings, Juneteenth for Mazie introduces young readers to this historical day. ~ African – Elementary School

On June 19, 1865—more than two years after President Lincoln’s Emancipation Proclamation—the enslaved people of Texas first learned of their freedom. That day became a day of remembrance and celebration that changed and grew from year to year, eventually becoming an official holiday in the U. S. in 2021. With colourful illustrations and a timeline, The Juneteenth Story is an accessible introduction to this important American holiday. ~ Diverse – Elementary School

Cassie’s family has recently moved to Texas, and it doesn’t quite feel like home yet. Then one day there is a lot of excitement: Her aunt visits, her mom fills a big picnic basket with delicious food, the whole family dresses up and heads out. Cassie learns that it is Juneteenth. The community celebration helps her to feel a stronger connection with her new home state. With lively text and warm illustrations, Juneteenth Jamboree is a great introduction to this important holiday. ~ African – Elementary School 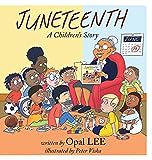 With cartoon-style illustrations, Juneteenth: A Children’s Story introduces the history of slavery and freedom to children in a simple and engaging way. Opal Lee highlights the celebration of Juneteenth and the importance of commemorating this milestone all across America. ~ African – Elementary School

Juneteenth describes the historical event from the perspective of some slaves as they go about their daily work. When the news of the abolition of slavery arrive, the man working in the cornfield starts to cry, the woman scrubbing the floors dances on the wet floor, the woman milking the cows falls to her knees. Everywhere in Texas people stop working and jump for joy. The expressive paintings of this touching picture book reflect the feelings of the freed slaves beautifully. ~ African – Elementary School

Raven The Great: What is Juneteenth?
by Dr. Paulette McClain 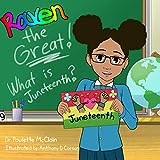 View the world through the eyes of Raven (affectionately known as Rae Rae), an 11-year-old African-American girl growing up in South Louisiana. In Raven The Great: What Is Juneteenth? she shares among her class about a holiday not mentioned in her history book. Her colorful personality and fun explanation of Juneteenth grabs the attention of her classmates and sparks their interest to learn more. ~ African – Elementary School

The History of Juneteenth: A History Book for New Readers
by Arlisha Norwood

On June 19, 1865, a Union soldier traveled to Texas to tell the enslaved people who lived there that they were free—that slavery was now illegal in every state. The people danced and sang in celebration of their freedom. Today, we pay tribute to this historical day with a special holiday on June 19 called Juneteenth. The History of Juneteenth is an engaging book that takes kids on an exciting journey through all the events that led up to the first Juneteenth, the day itself, and the impact it had on the future of the U.S. Includes a visual timeline and thought-provoking questions. ~ African – Elementary School

Together with their elderly Aunt Marshall, June and her sullen cousin Lillie from New York celebrate Juneteenth in 1943 Texas. Lillie is bored with “the dumb old slave holiday,” but when she sees the many “Whites Only” signs, she realizes that freedom still very much needs to be fought for. When Aunt Marshall tells the girls about what it was like for her to be born a slave and to be set free, both girls are profoundly moved. Freedom’s Gifts introduces children to the subjects of slavery, Juneteenth and segregation. ~ African – Elementary School

Opal Lee and What It Means to Be Free: The True Story of the Grandmother of Juneteenth
by Alice Faye Duncan

Every year, Opal looked forward to the Juneteenth picnic—a drumming, dancing, delicious party. She knew from Granddaddy Zak’s stories that Juneteenth celebrated the day the freedom news of President Lincoln’s Emancipation Proclamation finally arrived in Texas in 1865—over two years after the president had declared it! But one Juneteenth day when Opal was twelve years old, an angry crowd burned down her brand-new home. This wasn’t freedom at all. She had to do something! But could one person’s voice make a difference? Could Opal bring about national recognition of Juneteenth? Opal Lee and What It Means to Be Free follows Opal on her historic journey to recognize and celebrate “freedom for all.” ~ African – Elementary School

All Different Now: Juneteenth, the First Day of Freedom
by Angela Johnson

All Different Now tells the story of the day freedom finally came arrived in Texas from a little girl’s perpective. Like every day her family gets ready to work in the cotton fields. The news that will change the family’s life forever reach them whilst working in the fields. “We were all / now and forever free / and things / would be / all different now.” With free verse text and rich watercolour paintings this is the most stunning of children’s books celebrating Juneteenth. Includes a timeline, glossary and notes from the author and illustrator. ~ African – Elementary School

On June 19, 1865 two years after the Emancipation Proclamation Galveston, Texas became the last place in the country to learn the slaves were free. Today, Juneteenth is a joyful celebration with parades, speeches, music, and more. Juneteenth is an engaging book about the origins and traditions of the holiday that honors the freedom of African Americans. ~ African – Elementary School

Free at Last: A Juneteenth Poem
by Sojourner Kincaid Rolle 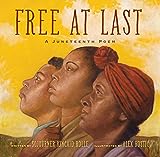 “After 300 years of forced bondage; / hands bound, descendants of Africa / picked up their souls—all that they owned— / leaving shackles where they fell on the ground, / headed for the nearest resting place to be found.” With deeply emotional, evocative free verse, Free at Last: A Juneteenth Poem is an ode to the strength of Black Americans and a call to remember and honour a holiday whose importance reverberates far beyond the borders of Texas. ~ African – Elementary School

Juneteenth: A Celebration of Freedom
by Charles Taylor

Juneteenth: A Celebration of Freedom provides in-depth coverage of the day that slavery ended in Texas. It explains the meaning and the historical context of Juneteenth and gives examples of the celebrations from 1866 to today. Colourful illustrations, archival photographs, and historical documents make the information accessible for readers aged ten and up. ~ African – Middle School

What Is Juneteenth? (What Was?)
by Kirsti Jewel

On June 19, 1865, a group of enslaved men, women, and children in Texas gathered around a Union soldier and listened as he read the most remarkable words they would ever hear. They were no longer enslaved: they were free. This news was cause for celebration, so the group of people jumped in excitement, danced, and wept tears of joy. They did not know it at the time, but their joyous celebration of freedom would become a national holiday. With 80 black-and-white illustrations and an engaging 16-page photo insert, What Is Juneteenth? contains stories from Juneteenth celebrations, both past and present, and chronicles the history that led to the creation of this joyous holiday. ~ African – Middle School

The Story of Juneteenth: An Interactive History Adventure
by Steven Otfinoski

The Emancipation Proclamation has brought an end to slavery, but the road to freedom is still long and hard. With 3 story paths, 46 choices, and 22 endings, The Story of Juneteenth lets young readers role play life as a freed slave. They have to overcome obstacles on their way north, find their lost family, and stand up for their rights when they are still being treated as a slave. This unique interactive story book makes history real for middle grade students. ~ African – Middle School

Juneteenth: Freedom Day chronicles the evolvement of Juneteenth from a relatively local to a nationwide celebration. The author and photographer traveled to various places in the US to experience and document this celebration of freedom. With photographs, historical facts and newspaper quotes, the book explores the history of Juneteenth in an accessible way.  ~ African – Middle School

Born a slave, Sis Goose has been unofficially adopted into the slave owner’s family after her mother’s death. Her and Luli, the farmer’s daughter, grow up as sisters. One day Union soldiers arrive and announce that slaves have been declared free for nearly two years. When Sis Goose realizes that the people she called family have lied to her for that long, she runs away, leading to  tragic consequences. Come Juneteenth is a moving historical novel about family, the true meaning of freedom and the historical events that led to the celebration of Juneteenth. ~ African – High School

“Tell me what happened while there’s still time,” demands the dying Senator Adam Sunraider to the itinerate preacher whom he calls Daddy Hickman. As a young man, Sunraider was Bliss, an orphan taken in by Hickman and raised to be a preacher like himself. Bliss’s history encompasses the joys of young southern boyhood; bucolic days as a filmmaker, lovemaking in a field in the Oklahoma sun. And behind it all lies a mystery: how did this chosen child become the man who would deny everything to achieve his goals? From the author of bestselling Invisible Man—the classic novel of African-American experience— comes Juneteenth, an evocative tale of a prodigal of the twentieth century. ~ African – High School

When Tiny hears rumours that the war is over and slaves will soon be free, she runs away from the plantation. In the back of a wagon she makes her way to Galveston where she hears Major General Granger read the proclamation announcing the slaves are free. Tiny joins the spontaneous celebration, but her former owner tries to prevent her from living a free life. Part of the Young Texans Series, Tiny’s Emancipation tells the gripping story of a young freed slave, and sheds light on the origins of Juneteenth. ~ African – High School