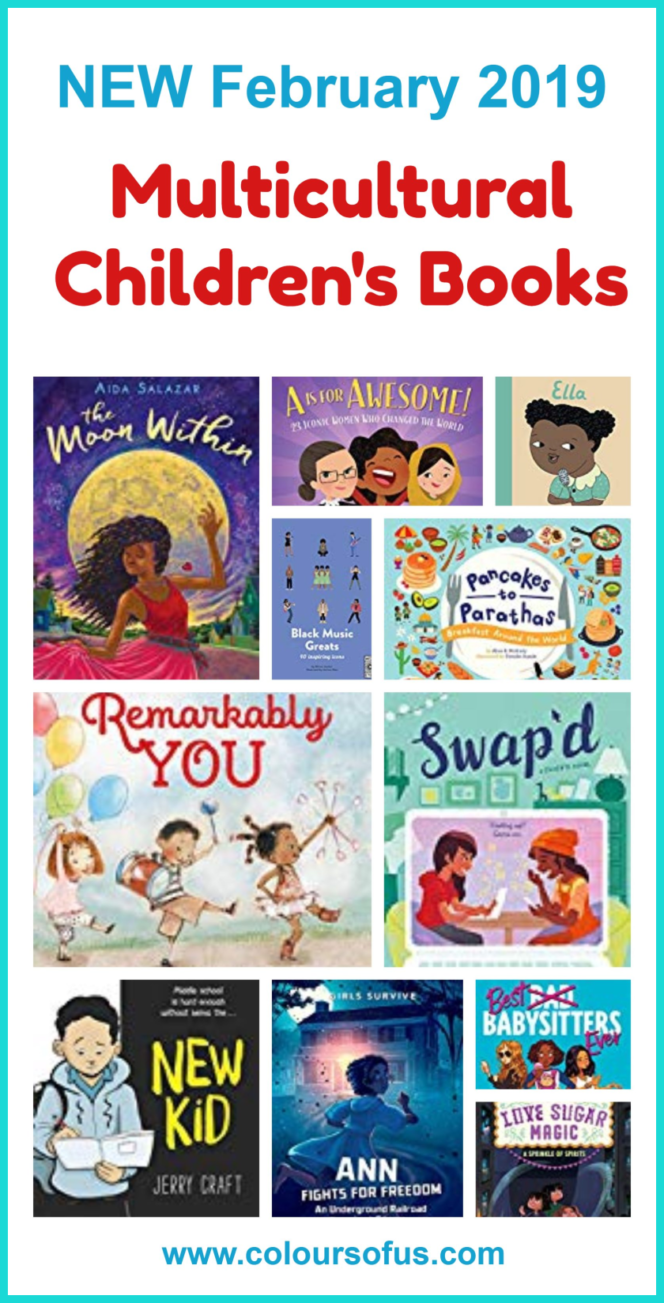 Browse our list of new multicultural children’s books! There is something for every age group here, from babies and toddlers to teenagers. Our personal favourites are Ella (Babies & Toddlers), Pancakes to Parathas (Preschool), Wilma’s Way Home (Elementary School), The Moon Within (Middle School) and Sparrow (High School).

A Is for Awesome!: 23 Iconic Women Who Changed the World
by Eva Chen

From Amelia Earhart to Malala Yousafzai,  Tina Turner, and all the way to eXtraordinary You and the Zillion of adventures you will go on, this vibrant board book introduces iconic women and girls to the littlest readers. A Is For Awesome is a fun alphabet book with spirited illustrations that will keep little ones’ attention. ~ Diverse – Babies & Toddlers

With stylish and quirky illustrations, Ella introduces the youngest dreamers to the First Lady of Song, from her early singing days on the streets of Harlem to her success as a jazz legend. Part of the Little People, Big Dreams series, this board book version of the international bestseller Ella Fitzgerald. ~ African – Babies & Toddlers

Another inspiring new board book in the Little People, Big Dreams series! In 1955, Rosa Parks refused to give up her seat to a white man on a segregated bus, sparking the Montgomery Bus Boycott. Her courageous decision had a huge impact on civil rights, eventually leading to the end of segregation on public transport. ~ African – Babies & Toddlers

Remarkably You
by Pat Zietlow Miller 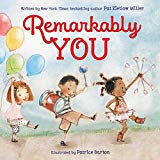 “You might go unnoticed, or shine like a star, / but wherever you go and whoever you are… / don’t change how you act to be just like the rest. / Believe in yourself and the things you do best.” With inspiring text and exuberant illustrations, Remarkably You celebrates all the wonderful ways children can be their remarkable selves. ~ Diverse – Preschool

My Mommy Medicine
by Edwidge Danticat 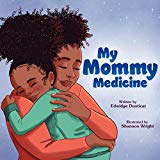 “Whenever I am sick, /  Or just feel kind of gloomy or sad, / I can always count on my Mommy Medicine.” When a child wakes up feeling sick, she is treated to a good dose of mommy medicine. Her remedy includes a yummy cup of hot chocolate; a cosy bubble bath, and plenty of cuddles. With lyrical text and vibrant illustrations, Mommy Medicine celebrates the comfort a mother’s love gives.  ~ African – Preschool

Pancakes to Parathas: Breakfast Around the World
by Alice B. McGinty

With rhyming text and bold colourful illustrations, Pancakes To Parathas takes young readers on a tour around the world to explore the breakfasts of twelve different countries, from cornmeal porridge in Jamaica to soured soybeans in Japan and deep-fried bean fritters in Nigeria. ~ Diverse – Preschool

When he was little, Muhammad Ali started boxing after not being able to fight off the thief who stole his bike. Over the years, he developed a strong jab and an even stronger work ethic. Together, these skills earned him the title Heavyweight Champion of the World. With quirky illustrations, Muhammad Ali introduces young readers to “the greatest boxer of all time”. Includes a biographical timeline, historical photos and a detailed profile of Ali. ~ African – Elementary School

Born to formerly enslaved parents, Carter G. Woodson read the newspaper to his father every day. When he worked in the coal mines he not only read to the other miners but also started researching the past of his people. Woodson went on to spend his whole life introducing people to Black History. Carter Reads The Newspaper is the first-ever picture book biography about the father of Black History Month. ~ African – Elementary School

Ruby Bridges: Get to Know the Girl Who Took a Stand for Education
by M. Michelle Derosier

In 1960, six-year-old Ruby Bridges was chosen to be the first (and only) black child at William Frantz Elementary School. On her first day, she was greeted by a hostile crowd and federal marshalls. Little did she know at the time that she would become America’s symbol for racial equality and desegregated education. Easy to read, with lots of historical photos and thinking questions, Ruby Bridges is excellent for classroom use. ~ African – Elementary School

Cesar Chavez: Get to Know the Leader Who Won Rights for Workers
by Rebecca Langston-George

From the same series as the above book, Cesar Chavez introduces the famous leader who won rights for workers. Cesar never forgot how it felt when his family lost their farm. He went on to fight for fair wages and labour laws for farmworkers and had a historical impact beyond the fields. ~ Hispanic – Elementary School

In 1956, the government uprooted Wilma’s family and moved them to California. Separated from her community, Wilma found refuge in the Indian Center in San Francisco where she developed the local Native community and championed Native political activists. When she returned to Oklahoma, Wilma took part in Cherokee government. Despite many obstacles, from resistance to female leadership to a life-threatening accident, Wilma’s dedication to serving her people led to her election as the first female chief of the Cherokee Nation. Interweaving prose with Wilma’s own words, Wilma’s Way Home is a moving account of this inspiring leader. ~ Diverse – Elementary School
More Native American books: 32 Native American Children’s Books

Part of the Fighting for Justice series, this book introduces young readers to Bridget “Biddy” Mason, an African American philanthropist, healer, and midwife born into slavery. Biddy refused to be defined by her enslavement and later became a business and civic leader in Los Angeles. Biddy Mason Speaks Up is an age-appropriate examination of slavery, racism, and community healing. Each chapter begins with lyrical text and full-colour illustrations, followed by keyword definitions, historical context, timelines, and questions posed to the readers.  ~ African – Middle School

Best Babysitters Ever
by Caroline Cala

12-year-old Malia convinces her friends Dot and Bree to start a babysitting club in order to earn funds for an epic birthday bash. But babysitting isn’t exactly what they thought it would be… Best Babysitters Ever is a funny middle-grade novel about friendship, jealousy and first crushes. ~ Diverse – Middle School

Love Sugar Magic: A Sprinkle of Spirits
by Anna Meriano

In this follow-up of the instant hit Love Sugar Magic: A Dash of Trouble, Leonora Logroño has finally been introduced to her family’s bakery bruja magic. But since her special power hasn’t shown up yet, her family still won’t let her perform her own spells, and they expect her to keep the family magic secret, even from her best friend Caroline. Suddenly spirits are popping up all over town, causing all sorts of trouble! Is this Leo’s fault? And can she reverse the spell before it’s too late? Love Sugar Magic: A Sprinkle Of Spirits is a charming book that middle-graders will love. ~ Hispanic – Middle School

The second book in the Click’d series, Swap’d sees Allie Navarro determined to redeem herself. So when the class gets an assignment to create a mobile game from recycled code, Allie pairs up with Courtney, her best friend from CodeGirls camp, to create the perfect trade app. This fun and fast-paced novel about friendship, first crushes, and serious coding skills will have readers cheering Allie on from the first page to the last. ~ Hispanic – Middle School

10-year-old Fina Mendoza’s mom just died. She and her older sister Gabby move to Washington, D.C. to live with Papa, a congressman from California. Fina loves riding the Capitol subways, grabbing snacks in congressional offices, and spending more time with Papa. But after she encounters a mysterious cat, a string of disasters follows, and Fina must solve the mystery of the Demon Cat of Capitol Hill. Welcome To Washington, Fina Mendoza is a fun read with a lovable protagonist that will appeal to middle-graders everywhere. ~ Hispanic – Middle School

Who Is Michael Jordan?
by Kirsten Anderson

Part of the popular Who Was? series, Who Is Michael Jordan? introduces young readers to the famous basketball player who changed the game forever. Michael Jordan’s determination to be the best made him a star player on his college basketball team and later an NBA legend, both for his skills and his endorsements. ~ African – Middle School

Lety Out Loud
by Angela Cervantes

Recently immigrated to the U.S., Lety Muñoz loves volunteering at the Furry Friends Animal Shelter because the dogs and cats there don’t care how fast she can find the right word in English. When another volunteer sets up a secret competition to determine who will be the official shelter scribe, Lety is worried that if the shelter finds out, they’ll kick her out of the program. And then she’ll never be able to adopt her favourite shelter dog! Lety Out Loud is a touching story about compassion, empathy and living between two cultures. ~ Hispanic – Middle School

Seventh-grader Jordan Banks’ passion is drawing cartoons about his life. He’d love to go to art school but his parents decide to send him to a prestigious private school known for its academics instead. Jordan soon finds himself torn between two worlds. New Kid is an engaging graphic novel about fitting in and staying true to yourself. ~ African – Middle School

The Moon Within
by Aida Salazar

11-year old Celi Rivera has lots to grapple with, from her changing body to her first crush and her best friend’s exploration of gender fluidity. But most of all, she is dreading the looming arrival of her first period, because her mother insists on having a traditional Mexican moon ceremony. Told in verse, The Moon Within is a sensitive and humorous coming-of-age story that will appeal not only to young Latinas but girls everywhere. ~ Hispanic – Middle School

Twelve-year-old Ann understands there is only one thing to be grateful for as a slave: having her family together. But when the master plans to sell her and her younger brother to two different owners, the family decides to run away on the Underground Railroad. Will they survive the dangerous trip to their freedom in the North? Ann Fights For Freedom is a compelling read with expressive illustrations. ~ African – Middle School

Robert Sengstacke Abbott: A Man, a Paper, and a Parade
by Susan Engle

The first title in the newly launched Change Maker Series, Robert Sengstacke Abbott is the biography of the founder of The Chicago Defender, one of the first influential newspapers for African Americans, in 1905. Robert Abbott uplifted and inspired generations of African Americans and encouraged them to fight for equality during a time when many were deprived of basic freedom. ~ African – Middle School

The Ride
by Nancy Cathers Demme

After setting fire to the barn where his abusive stepfather is working, 15-year-old Diego Ramirez flees his home in El Paso in 1952.  Believing he has killed the man, Diego steals his mother’s life savings and hitchhikes through Texas. He encounters a bigoted truck driver, a woman who only gives rides to children of crippled spirit, a salesman who feeds Diego’s dreams of success, and a lonely widow, who takes him in only to have to let him go. The Ride is a vividly written, suspenseful novel about loss, love and what it means to be human. ~ Hispanic – High School

Sparrow doesn’t make friends easily. The only person at school she feels comfortable with is the school librarian who lets her eat her lunch in the library office and shares her passion for novels. When Mrs Wexler is killed in a freak car accident, Sparrow’s world unravels and she’s found on the roof of her school in an apparent suicide attempt. With the help of an insightful therapist, she finally reveals the truth of her inner life and discovers an outlet in music. Sparrow is a compelling book about social anxiety, love and grief. ~ African – High School