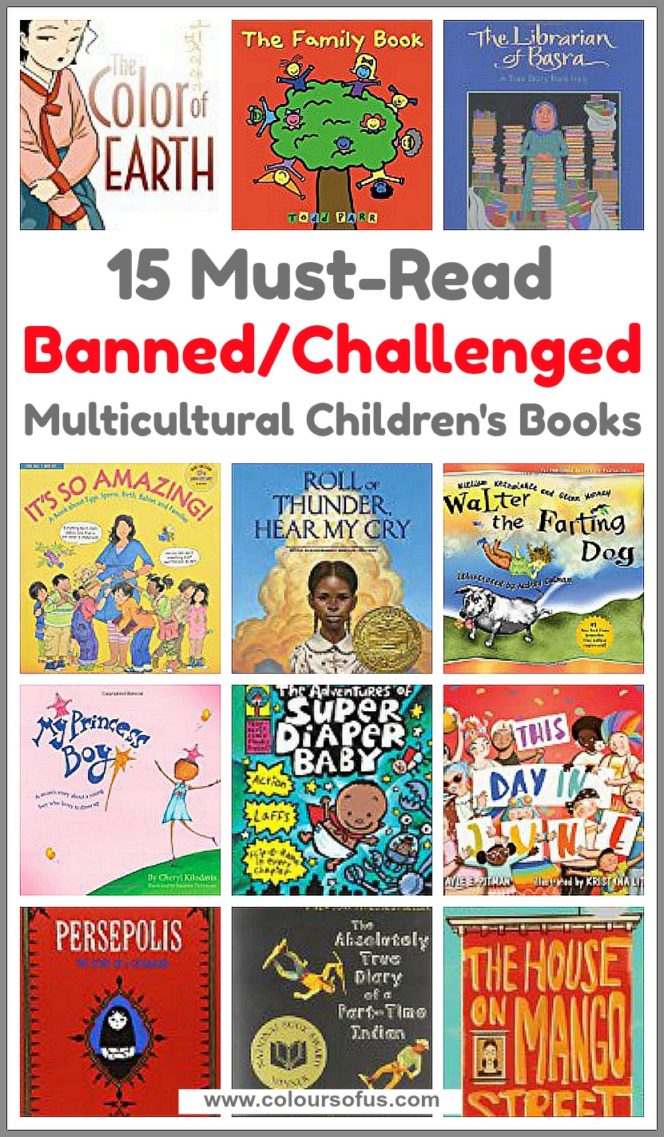 It’s Banned Books Week! Launched in 1982 to create awareness of the harm of censorship, this annual event celebrates the freedom to read and express ideas. Each year, many diverse books are among those challenged and banned.

Celebrate Banned Books Week by reading some of these banned/challenged multicultural children’s books:

The Family Book
by Todd Parr 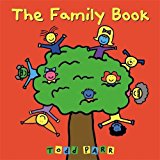 Can’t believe this all-time favourite of ours was actually banned! With his signature quirky style, Todd Parr explores different kinds of families, from adoptive families to step-families, from families with only one parent to families with two moms or two dads and different kind of animal families. The Family Book is a must-have for preschoolers that celebrates our differences and promotes tolerance. ~ Diverse – Preschool

Banned for ‘reference to same-sex parents‘

My Princess Boy
by Cheryl Kilodavis 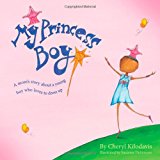 Inspired by the author’s son, My Princess Boy tells the story of little Dyson who loves all things pink and sparkly and sometimes wears dresses. This touching picture book about a loving family who supports their son unconditionally is a call to end gender-stereotyping and celebrating our differences instead.  ~ Diverse – Preschool

Challenged for ‘promoting perversion and the gay lifestyle’

This Day in June
by Gayle E. Pitman

With exuberant pictures and joyful text, This Day In June invites young readers to join in a colourful pride celebration. A great first introduction to LGBTQ history and culture, the book also includes information on how to talk to children about sexual orientation and gender identity in age-appropriate ways.  ~ Diverse – Preschool

Challenged for ‘promoting perversion and the gay lifestyle’

Challenged for ‘using the words “fart” and farting” twenty-four times’

It’s So Amazing!: A Book about Eggs, Sperm, Birth, Babies, and Families
by Robie H. Harris

With engaging comic-style illustrations and lively text, It’s So Amazing! answers the many questions children have about reproduction, sex and sexuality. From basic anatomy, conception, and fetal development, to love, birth, genetics, and adoption, this straightforward book provides factual information in an age-appropriate manner. It also sensitively touches on sexual abuse and HIV. ~ Diverse – Elementary School

The Librarian of Basra: A True Story from Iraq
by Jeanette Winter

“In the Koran, the first thing God said to Muhammad was ‘Read.’” When war comes to Iraq, librarian Alia Muhammad Baker takes matters into her own hands to protect the books from being destroyed. Every day she packs her car with books and takes them home, thus saving 70% of the 30,000 books in her library. The Librarian of Basra is a true story about an inspiring woman’s love of literature and respect for knowledge.  ~ Asian – Elementary School

Since her parents were taken by the Taliban, little Nasreen has not spoken a word. In a desperate attempt to draw her out of her shell of sadness, her grandmother sends her to a secret school for girls. Reading books slowly helps Nasreen back into life. Nasreen’s Secret School is a powerful true story from Afghanistan, told in a matter-of-fact style and complemented by precise acrylic paintings in muted reds, greens and yellows. ~ Asian – Elementary School

The Adventures of Super Diaper Baby
by Dav Pilkey

George and Harold, the two prank-loving boys from the Captain Underpants comics, are in trouble again. As punishment, they have to write a report on “good citizenship,” and they are not allowed to make it about Captain Underpants. So they create an all-new superhero . . . Super Diaper Baby! Follow The Adventures of Super Diaper Baby as his archenemy, Deputy Dangerous, wants to steal his powers and take over the planet. ~ Diverse – Elementary School

Roll of Thunder, Hear My Cry
by Mildred D. Taylor

Set in Mississippi at the height of the Depression, Roll of Thunder, Hear My Cry tells of one family’s struggle to maintain their integrity, pride, and independence in the face of racism and social injustice. This classic masterpiece focuses on Cassie Logan, an independent girl who discovers why having land of their own is so crucial to the Logan family, and learns to draw strength from her own sense of dignity and self-respect. ~ African – Middle School

The Watsons Go to Birmingham
by Christopher Paul Curtis

Meet the “Weird Watsons”: 10-year-old Kenny, his mom, dad, little sister Joetta and older brother Byron. When Byron gets into too much trouble, the family drives to Alabama to visit Grandma, the one person who can shape him up. It’s 1963, and little does the family know that they are heading straight into one of the most horrific moments in America’s history: the bombing of a church that killed four little girls. Award-winning The Watsons Go To Birmingham is both hilarious and heartbreaking – a modern classic that every middle grader should read.  ~ African – Middle School

Banned for ‘violence’ and ‘offensive language’

Junior, an aspiring cartoonist, leaves his school on the Spokane Reservation to attend an all-white farm town school. Based on the author’s own experiences, The Absolute True Diary of a Part-time Indian is a heartbreaking, funny, and beautifully written novel about the contemporary adolescence of a Native American boy. Illustrated with poignant cartoon-style drawings. ~ Diverse – Middle School, High School

Banned for being ‘anti-family’, ‘sexually explicit’ and ‘unsuitable for age group’

Persepolis: The Story of a Childhood
by Marjane Satrapi

Persepolis is a powerful and poignant account of growing up during the Islamic Revolution. In striking black-and-white comic strips, the author tells the story of her childhood in Tehran – a childhood that saw the overthrow of the Shah’s regime, the triumph of the Islamic Revolution, and the devastating effects of war with Iraq. ~ Asian – High School

The House on Mango Street
by Sandra Cisneros

The House on Mango Street tells the remarkable story of Esperanza Cordero, a young Latina girl growing up in Chicago. In short poems and stories – some heartbreaking, others full of joy – Esperanza expresses her thoughts and feelings about her oppressive environment. Acclaimed by critics and often used in schools and universities, this classic has been translated all over the world and should be on every young adult’s bookshelf. ~ Hispanic – High School

Banned for being ‘associated with Mexican American Studies’

The Color of Earth
by Kim Dong Hwa

The first book in a trilogy, The Color of Earth is a coming-of-age story in the form of a manwha, the Korean equivalent of a manga. It follows young Ehwa as she grows up helping her widowed mother run the local tavern. When she sees her mother fall in love again, Ehwa begins to open up to the possibility of love, too. ~ Asian – High School

“Sometimes I feel like I have walked into the middle of a movie. Maybe I can make my own movie. The film will be the story of my life. No, not my life, but of this experience. I’ll call it what the lady prosecutor called me … Monster.” Multi-award-winning Monster chronicles the unfair court proceedings for Steve Harmon, a teenager accused of murder and robbery. Written as a screenplay playing in Steve’s imagination, coupled with his journal entries, this heart-wrenching novel highlights the racism deeply ingrained in the American justice system. ~ African – High School