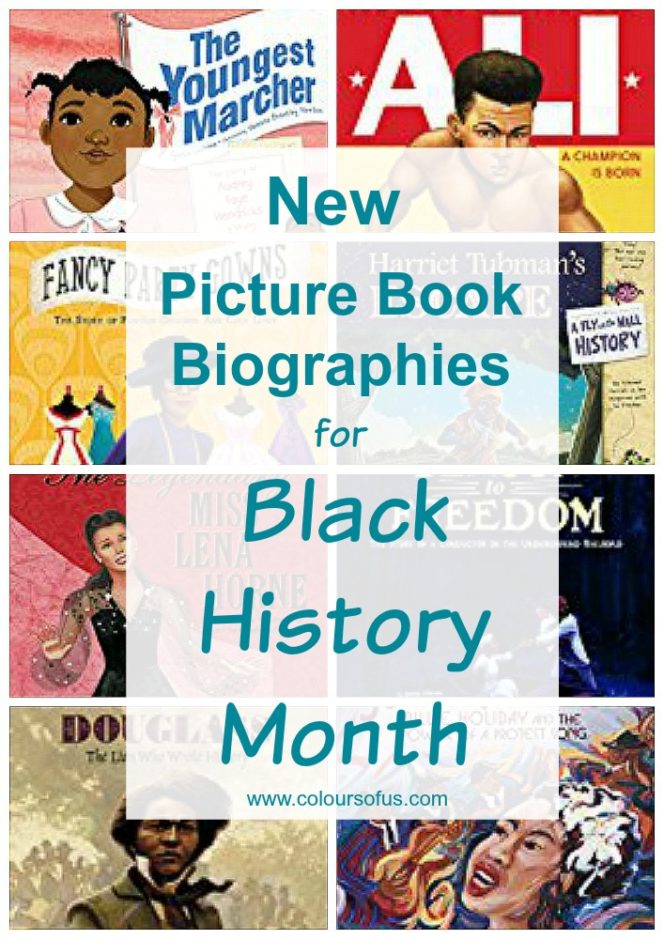 Just in time for Black History Month, some amazing new picture book biographies about iconic African Americans have recently been published. From little-known fashion designer Ann Cole Lowe to boxing legend Muhammad Ali, these picture books feature a variety of people who have, all in their own ways, left important marks in Black History.

The Youngest Marcher: The Story of Audrey Faye Hendricks
by Cynthia Levinson 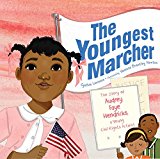 9-year-old Audrey Faye Hendricks was the youngest known child to be arrested for a civil rights protest. Wanting to be able to do things like anybody else, she joined a march against segregation laws in Alabama in 1963. The Youngest Marcher is an inspiring picture book that shows that you’re never too little to make a difference. ~ Elementary School

“Once you learn to read, you will be forever free.” Bestselling author Walter Dean Myers and acclaimed artist Floyd Cooper take young readers on an inspiring journey through the life of Frederick Douglass. With lush illustrations, Frederick Douglass brings to life the inspiring story of the self-educated slave who became an iconic leader of the abolition movement, an esteemed writer, speaker, and social reformer. ~ Elementary School

Zip alongside two cartoon flies as they follow Harriet Tubman’s daring Escape from slavery – across fields, over fences, and through dark forests. Harriet Tubman’s Escape: A Fly on the Wall History tells the story of this heroic moment in American History in an accessible way, providing a good balance of facts and fun. ~ Elementary School

Muhammad Ali: A Champion Is Born
by Gene Barretta

Muhammad Ali: A Champion Is Born tells the story of a pivotal childhood moment that set the boxing legend on his path to become the Greatest of All Time. When 12-year-old Cassius Clay had his brand-new bike stolen in the streets of Louisville, Kentucky, he wouldn’t let it go without a fight. That was the day he discovered boxing. Includes biographical overview, photos, bibliography, and more resources. ~ Elementary School 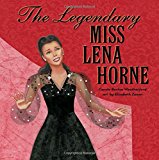 “You have to be taught to be second class; you’re not born that way.” Born into a family of teachers and activists. Lena Horne followed her dream to become an actress, despite facing racial discrimination, and many stereotypes. The Legendary Mis Lena Horne is an inspiring and beautifully illustrated picture book that celebrates the life of the pioneering African American actress and civil rights activist. ~ Elementary School

Beacon to Freedom: The Story of a Conductor on the Underground Railroad
by Jenna Glatzer

Not as well-known as Harriet Tubman, Reverend John Rankin was also a pivotal figure in the Underground Railroad network. He helped more than 2,000 slaves escape to freedom. With expressive illustrations, Beacon to Freedom follows Rankin as he guides runaways across the Ohio River with a light in his window, giving them hope in a time of great fear and danger.  ~ Elementary School

“Wisps of cloth would fall from their worktables like confetti, / and Ann would scoop them up and turn them into flowers / as bright as roses in the garden.” Fancy Party Gowns is a beautiful picture book about Ann Cole Lowe, a little-known black fashion designer who – despite hardship and discrimination – pursued her passion and went on to design party gowns for America’s high society, including Jackie Kennedy’s wedding dress. ~ Elementary School

Strange Fruit: Billie Holiday and the Power of a Protest Song
by Gary Golio

Jazz and blues performer Billie Holiday’s life changed forever with  “Strange Fruit”, a song about injustice and lynching. In the 1930s, the young black woman raised in poverty and Abel Meeropol, the son of Jewish immigrants, combined their talents to create the song that challenged racism and paved the way for the Civil Rights movement. With dynamic illustrations, Strange Fruit is a powerful book, excellent for classroom use. ~ Elementary School, Middle School

Multicultural Book of the Month: Voice of Freedom

Multicultural Book of the Month: The Case for Loving