April saw the release of some gorgeous new multicultural children’s books! Our favourites this month are In My Anaana’s Amautik (Preschool), A Story About Afiyah (Elementary School), One Earth (Middle School), and Mad, Bad & Dangerous To Know (High School). Which are yours?

Who Will You Be?
by Andrea Pippins

“My child, my little one, / Who will you be when you are grown? / There’s loving kindness in your eyes, like your daddy’s / and boldness in your heart, like your grandma’s. / Will you be like them?.” So begins this loving picture book about a mother who wonders who her child will grow up to be. For fans of I Am Enough, The Day You Begin, and The Wonderful Things You Will Be, Who Will You Be? is a poignant picture book about how family and community help shape the wonderfully unique people our children become. ~ African – Preschool

Daisy is super excited to meet her Yeh-Yeh from China for the first time. She has big things planned, like tea parties and snow angels, but Yeh-Yeh  turns out to be quite a grumpy man. Daisy tries all sorts of things to get him to be more jolly. Will she be able to make him smile before he goes home? Grandpa Grumps is a funny and heartwarming story about overcoming cultural differences and connecting across generations. ~ Asian – Preschool 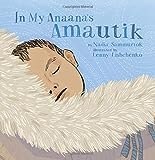 In My Anaana’s Amautik offers the unique perspective of a baby carried in the pouch in the back of a mother’s parka, from the cloudlike softness of the pouch to the glistening sound of Anaana’s laughter. Children and adults alike will love this sweet and soothing picture book!  ~ Diverse – Preschool 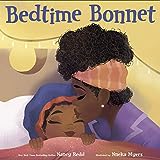 “In my family, every night when the sun goes down, our hair goes up!” But one night the little narrator of the story cannot find her bonnet… Bedtime Bonnet is a cheerful and heartwarming celebration of a Black family’s nighttime hair rituals. ~ African – Preschool

A little girl observes some of the things she loves — the apricot jam on her toast, the light-up shoes that make her feet bounce, the sparkling river, the pencil whose color comes out like a ribbon. But even after the jar becomes empty, and the shoes grow too small, and the pencil is all used up, one thing always stays the same. What I Like Most is a lyrical ode to the bond between mother and child, brought to life by award-winning artist Zhu Cheng-Liang’s gorgeous illlustrations.  ~ Asian – Preschool

Wherever I Go
by Mary Wagley Copp 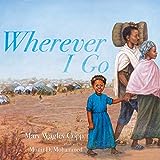 Despite living in a refugee camp, Abia feels like a queen. Sometimes she’s a noisy queen, banging on her drum as she and Mama wait in the long line for rice. Sometimes she’s a quiet queen, cuddling her baby cousin while Auntie is collecting firewood. And sometimes, when Papa talks hopefully of their future, Abia wonders if she will still be a queen in her new forever home. Wherever I Go is a hopeful and warm tribute  to the strength and courage of refugees around the world.  ~ African – Elementary School

A Story About Afiya
by James Berry

Some people have dresses for every occasion but Afiya needs only one. Her dress records the memories of her childhood, from roses in bloom to pigeons in flight, from tigers at the zoo to October leaves falling. With stunning expressive illustrations, A Story About Afiyah is a joyful celebration of a young girl’s childhood, written by the late Coretta Scott King Book Award-winning Jamaican poet James Berry. ~ African – Elementary School

Exquisite: The Poetry and Life of Gwendolyn Brooks
by Suzanne Slade

Born in 1917, Gwendolyn Brooks became known for her poems about about love, loneliness, family, and poverty. With expressive illustrations and lyrical text, Exquisite follows the celebrated poet’s life, from her early childhood to the moment she became the first Black person to win the Pulitzer Prize in 1950. ~ African – Elementary School

The Cat Man of Aleppo
by Irene Latham & Karim Shamsi-Basha

“Aleppo’s city center no longer echoes with the rich, exciting sounds of copper-pot pounding and traditional sword sharpening. His neighborhood is empty–except for the many cats left behind.” Alaa loves Aleppo, but when war comes his neighbours flee to safety, leaving their many pets behind. Alaa starts feeding them but there are so many that he will need to find help from others. The Cat Man Of Aleppo tells the true story of a courageous man who in the midst of the Syrian Civil War offered a safe haven to Aleppo’s abandoned cats. ~ Asian – Elementary School

How to Solve a Problem: The Rise (and Falls) of a Rock-Climbing Champion
by Ashima Shiraishi

To a rock climber, a boulder is called a “problem,” and you solve it by climbing to the top. There are twists and turns, falls and scrapes, and obstacles that seem insurmountable until you learn to see the possibilities within them. From Ashima Shiraishi, one of the world’s youngest and most skilled climbers, comes this story of strength and perseverance. How To Solve A Problem challenges readers to tackle the problems in their own lives and rise to greater heights than they would have ever thought possible. ~ Asian – Elementary School

“What have I to fear? / My master broke every promise to me. / I lost my beloved wife and our dear children. / All, sold South. / Neither my time nor my body is mine. / The breath of life is all I have to lose. / And bondage is suffocating me.” In stanzas of six lines each, strikingly illustrated Box tells the powerful story of how Henry Brown shipped himself from slavery to freedom. Includes timeline, historical records and an excerpt from Henry’s own writing. ~ African – Middle School

One Earth: People of Color Protecting Our Planet
by Anuradha Rao

“Who is an environmental defender? What does she or he look like? Maybe like you. Maybe like me.” In twenty short biographies, One Earth introduces diverse activists from all around the world. From saving ancient trees on the West Coast of Canada, to protecting the Irrawaddy dolphins of India, to uncovering racial inequalities in the food system in the United States, this thought-provoking book is full of environmental role models for young readers. ~ Diverse – Middle School

When Stars Are Scattered
by Victoria Jamieson & Omar Mohamed

Omar and his younger brother, Hassan, grow up in Dadaab, a refugee camp in Kenya where there is never enough food, and no access to the medical care Omar knows his nonverbal brother needs. So when Omar has the opportunity to go to school, he knows it might be a chance to change their future . . . but it would also mean leaving his brother, the only family member he has left, every day. When Stars Are Scattered is a heartbreaking yet hopeful graphic novel about a childhood spent waiting. ~ African – Middle School

Following on from the shocking ending of The Midnight Blade that saw Jack, June, Quint, and Dirk battle an endless horde of animated skeletons, the kids are now planning their next move. But an unexpected threat emerges and June Del Toro gets dragged away from her friends to a town overgrown with monstrous vines and never-before-seen creatures. Drawing on her post-apocalyptic survival skills–and with the help of some odd new companions–she attempts to make her way back home. Told from June’s point of view, June’s Wild Flight is the latest in the New York Times bestselling adventure series, full of high-stakes action and stunning revelations. ~ Hispanic – Middle School

Ghost Squad
by Claribel A. Ortega

Shortly before Halloween, Lucely Luna and her best friend, Syd, cast a spell that accidentally awakens malicious spirits, wreaking havoc throughout St. Augustine. Together, they must join forces with Syd’s witch grandmother, Babette, and her tubby tabby, Chunk, to fight the haunting head-on and reverse the curse to save the town. Debut novel Ghost Squad is an action-packed supernatural fantasy that young readers won’t be able to put down. ~ Hispanic – Middle School

The Prettiest
by Brigit Young

The prettiest: It’s the last thing Eve Hoffmann expected to be, the only thing Sophie Kane wants to be, and something Nessa Flores-Brady knows she’ll never be . . . until a list appears online, ranking the top fifty prettiest girls in the eighth grade. Eve is disgusted by the way her body is suddenly being objectified by everyone around her. Sophie is sick of the bullying she’s endured after being relegated to number two. And Nessa is tired of everyone else trying to tell her who she is. The Prettiest is an empowering novel about three girls who decide to stand up against sexism and bullying. ~ Diverse – Middle School

Ryan Hart has a lot on her mind–school, self-image, and especially family. Her dad finally has a new job, but money is tight and the family has to sell their second car and moving into a new (old) house. But even if her life isn’t everything she would wish for, Ryan always finds a way forward, with grace and wit. Ways To Make Sunshine is the first book in a charming new middle grade series about a girl who is pure spirit, kindness, and sunshine. ~ African – Middle School

17-year-old Khayyam Maquet—American, French, Indian, Muslim—is on holiday in Paris with her parents but all she really wants is to be back home in Chicago figuring out her messy life. Two hundred years earlier, Leila is struggling to survive and keep her true love hidden from the Pasha who has “gifted” her with favoured status in his harem. Bridging centuries, Leila and Khayyam’s lives intertwine, and as one woman’s long-forgotten life is uncovered, another’s is transformed. Mad, Bad & Dangerous To Know traces the lives of two young women fighting to write their own stories and escape the pressure of cultural expectations defined by men. ~ Asian – High School

The Silence of Bones
by June Hur

“I have a mouth, but I mustn’t speak; / Ears, but I mustn’t hear; / Eyes, but I mustn’t see.” 1800, Korea: Orphaned sixteen-year-old Seol has been tasked with assisting a well-respected young inspector with the investigation into the politically charged murder of a noblewoman. As they delve deeper into the dead woman’s secrets, Seol’s loyalty to the inspector is tested when he becomes the prime suspect. June Hur’s elegant and haunting debut The Silence of Bones is a bloody historical mystery novel that young adults will love. ~ Asian – High School

This Is My Brain in Love
by I.W. Gregorio

All Jocelyn Wu wants for her junior year is to make it through without dying of boredom, to direct a short film with her BFF Priya Venkatram, and to not constantly being compared to Peggy Chang, the only other Chinese girl in her grade. Will Domenici has two goals: to find a paying summer internship, and to become an editor on his school paper. But when her family’s restaurant is on the brink of going under, it’s up to Jocelyn and her unlikely new employee, Will, to save it. What starts off as a rocky partnership soon grows into something more but family prejudices and the uncertain future of the restaurant threaten their budding romance. Told in dual narrative, This Is My Brain in Love is a stunning contemporary romance, exploring mental health, race and self-acceptance. ~ Asian – High School